“Joseph Prince, has indeed, been influencing much of the sheep in the various churches around the world to their destruction, and yet, much the church, especially Pastors and Elders seem to be strangely silent about it. If there is a ripe time for Pastors and Elders to stand up and publicly refute and rebuke Joseph Prince’s teachings, it is now. From what I know and intelligently guess, most don’t even raise this up as a matter of concern in the Sunday pulpits of their churches. Why such a silence when Rev George Ong has proven beyond a shadow of doubt that Joseph Prince is a wolf in sheepskin? If they don’t agree with Rev George Ong, then they should write their thoughts supporting that Joseph Prince isn’t preaching heresies and that he shouldn’t be contended against and be accepted and loved as fellow shepherd in Christ.

I am much impacted when I read (as much as I could handle thus far) the website of Rev George Ong about the real and sinister threat of Joseph Prince’s heresies. I am especially convicted when I read what he wrote:

Chapter 9: “Paul Was Utterly Consumed With The Threat Of False Teachers”

C. “It Is The Responsibility Of The Leadership To Refute False Teachings & Rebuke False Teachers: Titus 1:9-14.”

D. “If No Concerted Effort Is Made To Stop Joseph Prince’s Heresy, It Will Spread Like Gangrene & It Already Has: 2 Timothy 2:17-18.”

I fully agree with Rev George Ong that the Pastors’ and Elders’ role isn’t just to teach sound doctrine but to refute false teachings and rebuke false teachers (2 Tim 4:2; Titus 1:9-14). This has nothing to do with our personality or personal preferences about whether we are wired to perform such a role, but our basic and core responsibilities as the shepherds of God’s flock. I concur with Rev George Ong that if we only teach sound doctrine, we are only obeying just one half of our responsibilities. But if we don’t go further to refute heresies and rebuke heretics, we are not obeying God to fulfil the other crucial half of it. This is especially crucial when Jesus had already warned us that false prophets will arise in the last days to deceive the flock and lead them astray (Matt 24:11). Since Joseph Prince is impacting the world publicly and massively, the true shepherds must be brave to rebuke him publicly. And as more true shepherds begin to rise up in courage to contend against Joseph Prince’s heresies, I am sure many of those who have been influenced by his teachings would be shaken to re-examine the truth of his teachings.

Let me quote what Rev George Ong wrote in Volume 1, chapter 9 in his website as he could put things much better that I could (italics):

“Don’t you agree that false teachings have become so prevalent, especially in Singapore? Are you blind to the fact that a wolf – Joseph Prince – helms the biggest ‘church’ in Singapore? So, how can anyone deny that false teachings have become a serious threat? The church has been sleeping for too long, allowing the cancer of Joseph Prince’s heresy to eat her up little by little!”

“Because the Church has been too lax with Joseph Prince, his false teachings have been allowed to fester and grow like cancer. Since the advance of Joseph Prince’s heresies is not checked, the gangrene of his false teachings has spread like wildfire – his ‘church’ has become the biggest in Singapore. Are you shaken and saddened by the fact that the biggest ‘church’ in our own backyard in Singapore is pastored by a wolf in sheepskin? And because the church lacks the courage to check and counter him, his influence has now ballooned into a worldwide ministry. Not only has Joseph Prince’s heresy infected one nation in Singapore, but it is also now infecting many other nations around the world.

And from Singapore as the base, Joseph Prince is influencing the world with his Pseudo-grace doctrine.”

“Instead of being known as the Antioch of Asia, Singapore is now better and shamefully known as the world’s main exporter of heresy with Joseph Prince’s Pseudo-grace Theology. All shepherds (including myself) ought to feel ‘corporately responsible’, as the Pseudo-grace heresy that is causing theological havoc around the world, ‘originates’ from our very own hometown of Singapore. As a Singaporean believer and preacher, I feel ‘responsible’ because Joseph Prince is from our own backyard of Singapore. Believers and pastors in Singapore must do what they can to stem the aggressive spread of the Pseudo-grace doctrine. The failure to do anything is to be ‘irresponsible’. Not that we can stop it completely, but we must do all that is within our means to curb the flow of such destructive teachings.”

“This is no more an academic discussion but an existential reality that stares us right in the face when 34,000 people in Singapore and millions around the world have been deceived and enticed into the fold of the world’s most popular wolf – Joseph Prince.”

“It is time to be brave, to speak up and stand up for the courage of your convictions. Shepherds, if you love your sheep to protect them from the wolf, it’s time for you to sound the alarm clearly, loudly and publicly. Keeping quiet to remain respectable and stay out of trouble is no longer the option, as the eternity of souls is at stake.”

I could feel the pulse of Rev George Ong’s conviction in what he wrote as the influence of Joseph Prince’s heresies has even spread from Singapore and penetrated to churches in India, my beloved nation. Very sadly, many believers in India have been deceived to embrace Joseph Prince’s feel-good gospel and cheap grace teachings. As such, especially the shepherds of India and Singapore can no longer keep silent. I believe the real reason for the inaction and silence of many Pastors and Elders to speak out against Joseph Prince’s heresies is that such a task is unpopular, unpleasant and uncomfortable. But we have to remember that it is not about what we are personally comfortable about and what we would personally choose to do or don’t do. It is about our core responsibilities as the shepherds of God’s flock, not just to teach sound doctrine, but to refute false teachings and rebuke false teachers.

Let me end with 3 quotes, all taken from Volume 1 and Chapter 9 of Rev George Ong’s website (italics):

“A dog barks when his master is attacked. I would be a coward if I saw that God’s truth is attacked and yet would remain silent.” (John Calvin)

“The equivalent of inaction to the evil and intrusion of heresy is not indifference but cowardice.” (George Ong)

“To tolerate the spread of heresy without doing anything to curb it is to be a quiet accomplice to the treacherous evil.” (George Ong) 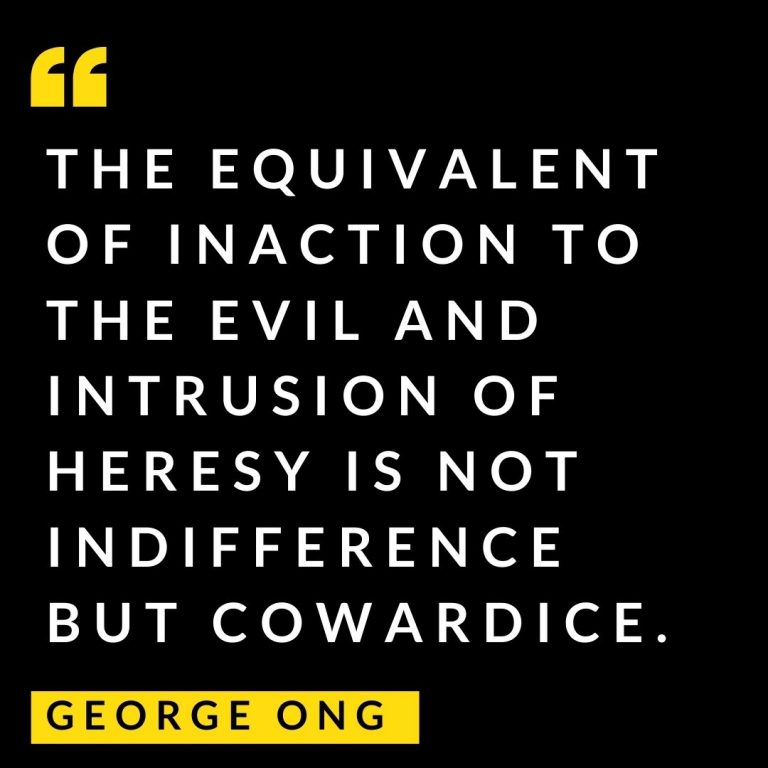 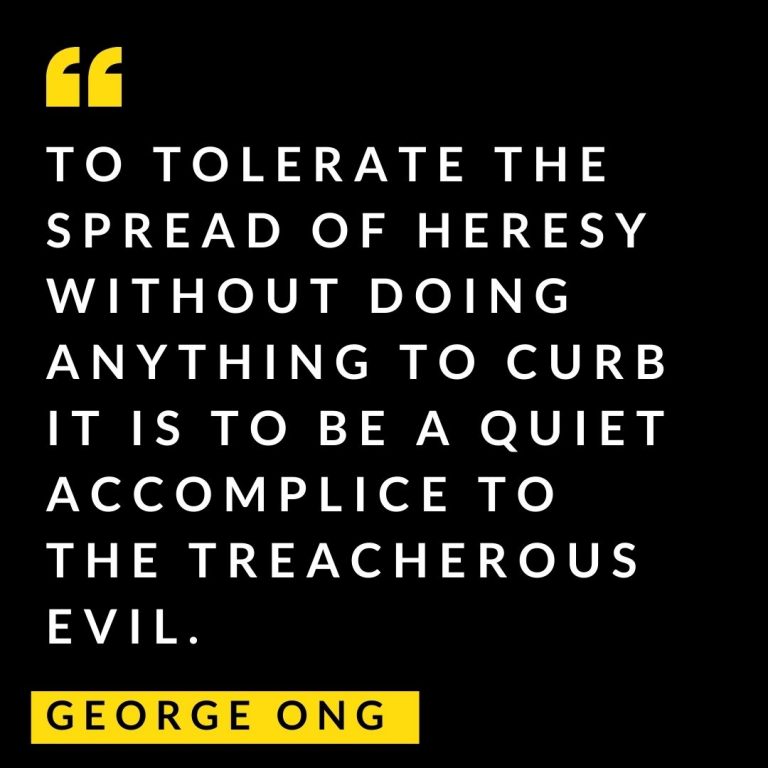 Rev George Ong: Has Joseph Prince lost much of his Popularity?